What is Ghost Jamming and how to resolve it? 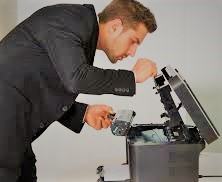 Contrary to its name, there is nothing supernatural or spooky about a ghost jam. Instead, ghost jamming refers to an issue whereby the copier reports a paper jam even though there is no paper being physically jammed within the copier. Such an occurrence is also known as a fake jam or a false jam.

A ghost jam usually occurs from previous paper jams in the copier, which may leave behind residue such as bits of shredded paper that are stuck between the gears moving the rear duplex of the copier. As such, the roller will feel stuck, causing the copier to assume that there is something stuck in the duplex and not in the gear itself, hence resulting in a ghost jam.

Fortunately, this issue can be troubleshooted quickly via the following steps: